The Singapore Prime Minister yesterday shared a photograph of a local gurdwara on his Facebook page, a day before he is scheduled to attend a dinner with the Sikh community.

Talk about timing! And the efficient use of social media.

“Wow i used to study at silat school opposite the sikh temple. Brought back memories. Nice pic,” said Cynthia Soon.

No prizes for the answer. Lee then provides the answer:

Many of you got it right. This is indeed the Gurdwara Sahib Silat Road, or Silat Road Sikh Temple. I guess the road sign was a giveaway. (I had meant to blur it out smile emoticon ) I had seen this temple many times while visiting SGH, but only in the daytime, until one night I spotted it through the trees. It looked so beautiful that the next time I was there at night I brought my camera and snapped this picture.

The Gurdwara was built in 1924, using funds raised mainly by Sikh members of the police force in Singapore and Malaysia. It used to house newly-arrived migrants from Punjab before they found lodging.

The Sikh community in Singapore may be small, but they have made important contributions to building Singapore. I will be joining the community for an event tomorrow evening. Am looking forward to it. – LHL

Tonight (28 Nov 2015), PM Lee will be celebrate the nation’s jubilee year with Singapore Sikhs at the Sikh Community Dinner 2015.

At the event, Lee will launch a book published by the Young Sikh Association, Singapore (YSA) in conjunction with SG50 – Singapore at 50 – 50 Sikhs and Their Contributions, which highlights the contributions of the Sikh Community towards the nation.

The publication, which has received funding from the SG50 Celebration Fund, honours 50 notable Sikhs who have contributed to Singapore’s development and nation-building across various fields including sports, politics, business, academia, civil society and the uniformed services.

These 50 Sikhs have been selected from about 250 nominations by an independent panel chaired by Prof Tan Tai Yong who is the Yale-NUS College executive vice president for academic affairs.

At the same event, the Singapore Sikh Education Foundation (SSEF), which administrates Punjabi as a second language in Singapore, will also be celebrating its 25th anniversary by honouring its teachers and staff who have been with the organization since its inception. 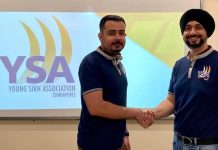 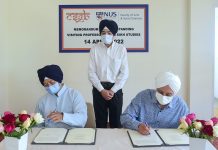 NUS Visiting Professorship in Sikh Studies. How did the idea come about?