Age is not an obstacle for Malaysian rally legend Karamjit Singh who once again made history by successfully winning three championships at the race in Muara Bungo, Jambi, Indonesia. The three-day race started on Friday.

The 60-year-old, known as the ‘Flying Sikh’, created a sensation by using a 16-year-old national car, Proton Gen2, to bag 12 trophies in the three championships he participated in with teammate and co-driver Jagdev Singh, reports Bernama.

Commenting on his achievement, Karamjit told the Malaysian news agency that even though he was using an “old machine”, it was not an obstacle for him to continue to make the country proud by beating a more sophisticated car worth RM1.5 million.

“I really have a passion for this, even though I don’t have a sponsor, I use my own money and an old machine, but I can still beat the more modern cars.

“Motorsports is expensive, but with the efforts and help from other competitors from Indonesia, I was able to achieve this success, and I want to chase many more successes,” he said.

The dynamic duo of Karamjit and Jagdev returned to the world of rally racing after almost four years due to the global pandemic.

At the same time, Karamjit said he also aimed to participate in the APRC next year by using the R5 Proton Iriz. He had previously participated in the Indonesian Rally Championship and the fourth round of the APRC 2022 in Lake Toba, Indonesia, but did not succeed in winning any categories due to the damage to his car.

ASIA SAMACHAR is an online newspaper for Sikhs / Punjabis in Southeast Asia and beyond. When you leave a comment at the bottom of this article, it takes time to appear as it is moderated by human being. Unless it is offensive or libelous, it should appear. You can also comment at Facebook, Twitter, and Instagram. You can reach us via WhatsApp +6017-335-1399 or email: asia.samachar@gmail.com. For obituary announcements, click here. 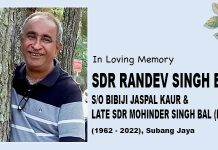 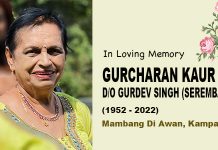